Everything I Do Is Courage 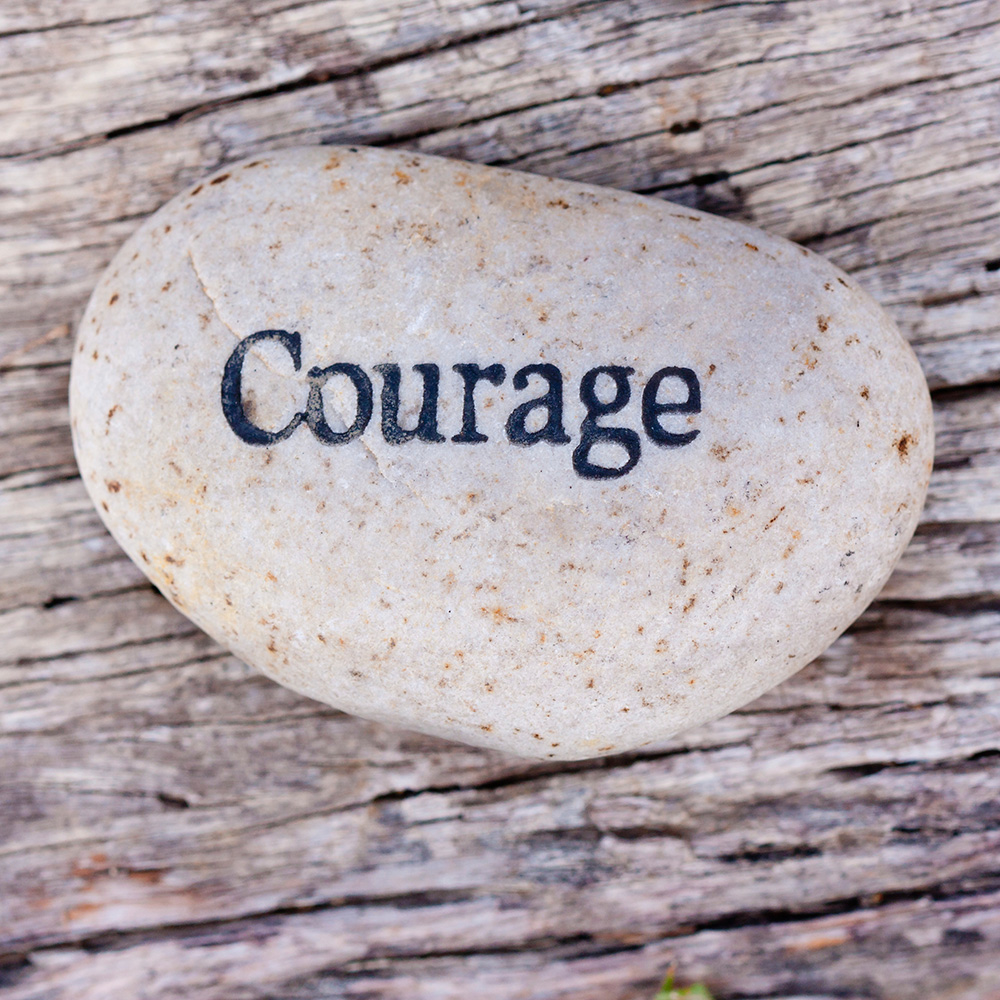 Highlights for Everything I Do Is Courage

Everything I Do Is Courage

If you asked me 10 years ago if I would quit my well-paid corporate job, start my own company, and live the amazing life that I have right now, I would have told you, “Hell no!”

Not because I didn’t want it but because I was just scared. Back then, wanting something that I didn’t even think was possible was like wishing on a four-leaf clover … it’s nice, it’s a dream, but it’s not reality.

Or, at least that’s what I thought…

The truth is that I was able to leave my soul-sucking corporate job and work for myself because everything I do is courage.

Now, I’m realizing a lot of this in hindsight, and there have been moments when I wasn’t super-courageous, but everything good that’s ever come to me has been a result of being courageous.

Courage without vulnerability is like the Cowardly Lion growling at Dorothy when he first met her. That’s like a drive-by shooting – blasting somebody without hearing them out or without a conversation. That’s not courage; that’s just word vomit.

True courage is speaking from your heart and listening with your heart.

You know, people often think that courage is optional. And I’m like, “WRONG!” Courage is not optional.

Well, it can be optional, but, to me, that’s just the fast track to making life a hell of a lot harder than it needs to be … and you’re sure not gonna get what you want by not having any vulnerability at all.

So, what is vulnerability? I think the best definition I’ve heard so far comes from Brené Brown. She says that vulnerability is uncertainty plus risk and emotional exposure.

I mean, uncertainty…? Uh, hi, I’m Shawna, and I’m a Certified Public Accountant. I really like certainty! And risk…? Soooo risk averse, I am. And emotional exposure? Ack! WHY WOULD ANYBODY DO THAT?!?

You know, I did not grow up being comfortable with vulnerability. I grew up believing that vulnerability was like giving someone a precise roadmap of ways to hurt me … like showing someone exactly where to put the knife to cause the maximum amount of damage. Embracing vulnerability is just not how I grew up.

But since becoming a life coach, since immersing myself in Brené Brown’s work, I have learned that vulnerability is not weakness. In fact, I think it’s total courage … I think it’s badassery to be vulnerable and to be comfortable with being vulnerable.

Being who you are…? There is nothing more courageous!

But in our culture, we associate vulnerability with something negative: it’s fear, it’s shame, it’s bad. But the truth is that vulnerability is the birthplace of joy and creativity, innovation, change, belonging, authenticity, and love. And what more could we want in our lives than all of those good things? And they all come from practicing vulnerability.

Vulnerability is something that you have to practice.

What You Want Is on the Other Side of Vulnerability

Being vulnerable gets easier the more you do it, but I don’t think that it comes naturally to most people. For the vast majority of people that I come in contact with, vulnerability is not a strength of theirs (or mine!), but I really do believe that everything you want in life comes with being vulnerable.

I look at myself and the things that I’ve wanted and accomplished: quitting my job, becoming a coach, starting my blog and my podcast, putting up boundaries, leaving a relationship that wasn’t working for me, meeting and then marrying my husband, asking for a raise or a promotion, having difficult conversations – all of those required courage and vulnerability.

I can guarantee you that courage and/or vulnerability are involved in getting the things you want in life.

Now, that doesn’t mean that everything has always worked out the way I wanted just because I was being vulnerable! The truth is that the only caveat to vulnerability is that you share it with someone who has earned the right to hear your story.

By that, I mean that you share your story with somebody who has also exhibited their vulnerability with you, who has built up a trust with you, and who is willing to sit with you in discomfort and support you unconditionally.

If the person you want to share something with hasn’t brought all that to the table with them, then they’re probably not a person who you want to practice your vulnerability with. Here’s an example…

Recently, I shared something very sensitive with someone in my life who had not earned the right to hear that story. In that case, sharing vulnerably actually backfired on me. The person that I shared it with…? They laughed at me. They mocked me. They even called me a liar!

To say that I was hurt is the understatement of the century. But was it courageous of me to share the story? Oh, hell yeah! Just because it didn’t work out doesn’t mean it wasn’t courageous.

And once I was able to take a step back and really look at what happened there, I had to take responsibility for sharing something sensitive with someone who hadn’t earned the right to hear it. Was I hurt? Yes. Was I able to move forward? Yes!

I was able to move forward because I realized it wasn’t about their reaction … it was that I opened myself up to someone who wasn’t capable of hearing my truth and my story.

Little Turtles, Clark Kent, and Unzipping Our Suit of Armor

Courage is doing something without the guarantee that it will work out, and it requires vulnerability, but we’re not always an open book. We don’t have to bare ourselves to everyone and anyone all the time. It doesn’t work like that, it doesn’t have to be like that, and that’s not what I’m talking about.

We’re like little turtles tucked inside our shells, and we have to learn when it’s the right time to come out of our shell versus when we need to protect ourselves. We have to discern who it’s safe to share with.

We need to practice asking ourselves: Has this person earned the right to hear my story? Is it safe for me to come out of my little turtle shell? Sometimes the answer is Yes, and sometimes the answer is No, but when we share our story with people who’ve earned the right to hear it, the payoff is almost instantaneous! You can feel the new connection or the deepening connection between you and the person you shared with. Vulnerability takes relationships to the next level.

Vulnerability is the key to getting everything you want in your life, especially closer relationships.

Have you seen how Clark Kent pulls his shirt open and reveals a little bit of his Superman suit underneath? It’s the same when we unzip our emotional armor, pulling the sides back a little bit to bare our heart and soul.

When you unzip your armor and let someone in – someone who has earned the right to hear your story – it’s a game changer. It can change the way that you operate, and it changes the way people feel about you. It deepens the trust; it deepens the relationship.

Vulnerability at Work and at Home

With vulnerability comes uncertainty … there is no guarantee that it’s gonna work out.

But if you want a closer relationship with somebody, you’ve got to have that conversation. If you want a  date with someone, you have to be willing to hear the word No. If you want someone to understand you better, you have to say, “Look, this is really what’s making me tick; this is what’s really going on.”

THAT is being vulnerable.

Eight years ago, I told my husband, Dan, that I wanted to become a life coach. Now, sharing that dream…? That was vulnerability. I did not expect him to be as supportive as he was (and I’m still thankful for it), and for months after I told him, he was the only person who knew because I was so scared of being vulnerable and having people laugh at my dream and snort things like, “Hmph. A life coach…? What in the hell is that?”

It’s all under the same umbrella because when I really empower people, I’m an empowerment coach. When I really help people step into their confidence, I’m a confidence coach. Sometimes I’m even a business coach! It all depends on what people bring to the table that day. Whatever they need from me is the coach hat I put on to help them. I never know what they’ll need, but I’m open to whatever happens – that is vulnerability, too.

I recently had a friend really put herself out there to deepen her connection with the homeowners of a house that she wanted to buy. There were several competitive offers on the house, so she wrote a heartfelt letter to the property owners that explained why she wanted so badly to buy their house.

She wrote about what the property meant to her and how connected she felt to it. She really poured her heart out, and … they picked her! With all the offers being equal, at the end of day, it was the feelings she expressed so vulnerably that made her their first choice.

So, where are you willing to step into some uncertainty and risk, not knowing whether or not it’s going to pan out for you, and still say, “You know what? Yes, I’m going to do that! I’m going to try that and see what happens.”

It doesn’t always work out, but when it does, it is AMAZING.

For me, everything I do is courage. Every day, in some way, I have courage in my hip pocket, and vulnerability is right next to it! It might be something as small as saying “I was next in line” or “You don’t get to talk to me like that” or “Yes, I would like some of that” or offering my services to someone by saying, “Hey, I can help you with that.”

Courage and vulnerability are with me every day and, whether I recognize it or not at the time, I use them every day. Maybe not for the whole day, but every single day, I do something that gets me one step closer to feeling more like myself.

Courage and vulnerability are the way to get it.

Your courage and vulnerability are the keys to change.