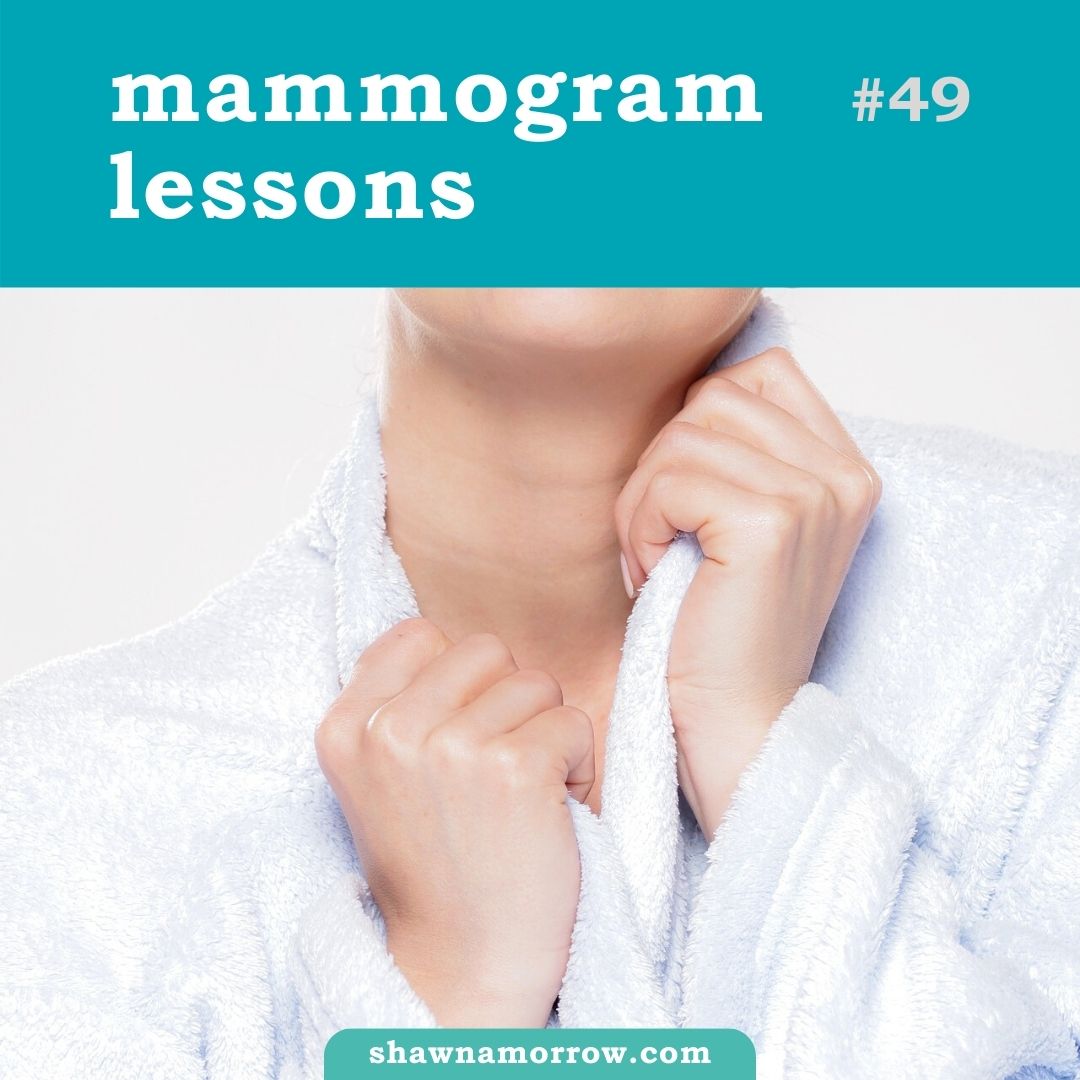 I recently went for my annual mammogram—

And if you haven’t done it yet, ladies, let this be your reminder to make your appointment!

—and I was dreading going to my appointment this year, but not for the reason you might think.

I was terrified of the gown.

When I went for my mammogram last year, the facility I’ve been going to for years was under new management. Not normally a deal-breaker, there are always minor changes that are noticeable but not a big deal.

The most noticeable change was with the gown you change into before they smash your boobs.

Someone who doesn’t understand that women come in all different shapes and sizes decided to change the usual medical gowns to “spa-like” robes.

And they were SOOO small … the XL was the size of a Medium.

Needless to say, the gown didn’t fit me, and I was embarrassed and very self-conscious. Still, I mustered the courage to find someone and ask for a larger size … which was a huge deal for me.

The woman I found very sweetly (but obliviously) said, “That’s the biggest one we have. It should be big enough to fit everyone.”

I am not everyone.

I Am Not Everyone

After wrestling with the robe for a few minutes and trying to stretch it around me, I gave up. I ended up not wearing the ill-fitting robe because I didn’t want all of the other women – in their white-waffle robes with the facility name embroidered on the side – to get a full-frontal view of my breasts! Shocking, I know!

So, I came out of the changing area, and they were all looking at me. I imagined they were wondering why I wasn’t wearing one of their Stepford White robes…

…or maybe they knew why.

The truth is, I had no idea what they were thinking, but my mind wanted to make up a shit-ton of stories about my body, my belonging, my worthiness, etc…

Anyway, I got my mammogram and told the technician that the gowns are not made for all women, and especially not for women of size. She was sympathetic, but she wanted to get my boob smash done so she could get on to the next one – after all, she had a room FULL of women waiting in their spa-like gowns.

As I left the facility, I tried again to tell someone that their gowns are not acceptable. The person I found was clearly not a decision-maker, but she gave me a phone number to call. I wasn’t encouraged, but I took the number and left.

Now, I’d be lying if I didn’t say that I felt kind of defeated, a little blown off, and super-terrible about myself.

“The gowns should fit everyone,” and yet it didn’t fit me. What did that mean? That I’m not everyone. And I felt the panic rising, but then…

The New Me vs The Old Me

As I walked to my car, I thought about all the women who must feel that way but say nothing out of shame for a gown that “should fit everyone” but doesn’t. I thought about how far I’d come, and how I used to be just like those women: get embarrassed, fall into a shame spiral, then want to disappear.

But I was proud of myself for asking for another gown, saying something to the technician, and when she couldn’t help, finding a third person to speak to.

The old me would have been sweating profusely – which would’ve been a whoooole other issue because I wasn’t wearing any deodorant!

The old me would have filled my head with bullshit stories like: See? This is why you should lose weight or Everyone else can fit into these gowns except you or Don’t make another appointment until you can fit into that gown.

The old me would have made it mean that I’m not good enough because someone decided to order micro-robes for the mammogram place … a place I visit only once a year, but the shame would have stayed with me long after I’d left.

And the outcome could have been dangerous if I had decided not to go back! And don’t think that thought wouldn’t have crossed my mind, because it would have, in the past.

I know so many people who do not go to the doctor because they’re afraid to be scolded about their weight, or they don’t go back because they had a bad experience, but an annual mammogram appointment is too important to skip.

I remember being that woman who couldn’t speak, and I’m not that woman anymore!

The Woman I Am

I want to be a woman who takes amazing care of herself, and part of that care is getting an annual mammogram.

And in order to take amazing care of myself, I had to do something different … I had to speak up.

So, I called the number I was given, and I spoke to a lovely woman. I told her what happened at their facility, and I was brutally honest.

I told her it was completely unacceptable that they didn’t have gowns for all women … that they used to have great gowns, and now they don’t. She said they wanted people to feel luxurious and thought the spa-like robes would give that vibe, but she realized they were wrong.

Then I told her about The Old Shawna, how she wouldn’t have said anything, and how I was sure there were lots of women who felt the burn of shame that their robe didn’t fit … and that I didn’t ever want another woman to feel like that. Not ever again. That this stops now. She agreed with me and apologized.

I told her that when I came back in a year, I expected to find gowns that would fit me, and she assured me that I would.

I forgot about that conversation until the night before my appointment, and, of course, it was right before I was trying to go to sleep.

My appointment was first thing in the morning, and I started the day a little panicked, flustered, and scared. I was afraid of feeling embarrassed or let down all over again, and I stepped back into that Old Shawna for a split second.

And then I remembered, Oh, hell no. I’m not that Shawna anymore.

So, I decided to assume the best and hope that they had taken care of it, but I would be prepared in case they didn’t, and I made a plan: I’d bring my own zip-up sweatshirt to wear if they didn’t have the proper gowns.

I checked in, took my seat, and went back when my name was called – sidenote: they actually called me “Mrs. Morrow” this time and not “Mrs. Meemo,” like they did a few years ago. 😊

And the lovely Beth walked me back, and to my surprise, she pulled out a gown that I recognize – the ones that fit! She handed it to me and pointed to a clean changing area (you know, because of COVID).

I told her I was so happy to see this gown because the “spa-like” ones from last year didn’t fit. She said, “Oh yeah, they were terrible … they ran so small!”

And then I almost cried again.

As I sat in the smaller waiting room, I remembered how I felt the last time I was there – defeated, defective, and not good enough.

Then I quickly remembered that I did something about it … and that I got the results I wanted!

And I was so proud of myself, I stood up in that little waiting room and snapped a selfie. And I proclaimed, “I earned this gown!!!”

My mammogram was clear, and I was thrilled with that.

But I was even more elated about advocating for myself and helping other women just like me –the old me.

I stood in my own space. I spoke my truth. And I got the results I wanted.

THAT is progress, my friends!

p.s. Make your appointment today! Boob Smash 2020 for all!