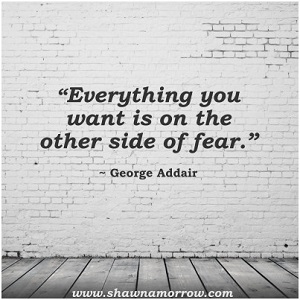 Almost 3 years ago, I was in gorgeous Savannah, Georgia with some of my favorite people.  I was at one of my mentors, Susan Hyatt’s amazing retreats and we were talking about what was holding us back.  Why are we not putting ourselves out in the world?  Why are we playing small?

Everyone went around the room and talked about their fears, I remember feeling so honored to be surrounded by these women who understand and supported me.  I listened to their fears and did my best to support them as they had done for me.

When it became my time to speak, I couldn’t.  I burst into tears.  Life coach hint – this means you’ve hit pay dirt – the truth is about to come spilling out.

I told them I was afraid that people would make fun of me.  I was afraid I would write something or do a video and it would go viral (in a bad way) and I would be laughed at and humiliated.  I told them I didn’t want to become a joke on Jimmy Fallon’s show.

Without missing a beat Susan Hyatt said, “Oh honey I could only wish that happens to you!  That will mean you’ve made it!  And they can send your checks to your beach house!”

I sat there snotty and stunned.  Was she right?  If something I said or did became that popular, would that be a good thing?  What if I was embarrassed?  What if they attacked my words, my opinion or worse, my appearance?  Could I survive that?

I felt so much love and support from my friends and Susan at that moment that we ended up laughing about how incredible that would actually be.  I mean, me with a beach house!  HA!  The thought had NEVER crossed my mind that I could own a beach house.  NOT IN A MILLION YEARS!

Less than two months later, my husband and I had a contract on…you guessed it…a beach house!

The first person I told was Susan and she screamed – “GET OUT!”

So two and a half years later, I’m sitting in my very own beach house writing this blog.

Had I never discovered what was holding me back, I would have never uncovered the possibility of a beach house.  Sharing that very real scary feeling was difficult to say the least and I have a really ugly cry – so it probably wasn’t a joy for them to watch either. But my friends held a safe place for me to reveal what was scaring me the most.

Every day I try my best to make decisions that are aligned with my highest good.  I try to think, act and speak from my heart.  I’m not always successful, but that’s my intention.  The more I am authentically me, the easier things happen in my life.

I’m always grateful for that weekend and my friends.  It allowed me to see myself in a new light, it made things less scary for me and it opened up the possibility for a beach house.

I Quit My Job!